Haunted house and its insane inhabitants 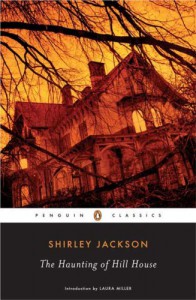 The Haunting of Hill House is considered as a classic ghost story, and being a fan of this genre, I decided to give it a try. In short, a scientist invited a group of people who had previously experienced supernatural / paranormal events to stay in Hill House. They are to stay there for a month and help him recorded any indication that will help prove the house is haunted.

I was disappointed by this book. I felt cheated by the hype over it and certainly did not live up to its reputation as one of the scariest horror novels. Since this book dealt more with psychological aspect, everything was presented in an ambiguous way. I usually preferred this kind of story telling, the uncertainty and not knowing definitely added to the creepy factor.

However, the unlikable characters and childish dialogues put me off from rating this book higher. Eleanor had nothing to recommend her. She was pain in the ass and had the ability to present herself where she was unwanted. Theodora was okay at first but then she became intolerable with all her jolly acts, while Luke was good for nothing.
The ending changed my opinion a little. It was a fitting ending. I also believed that the house is haunted and Eleanor is insane.