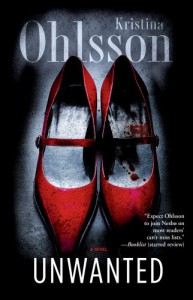 Aaah! I’m glad I give Unwanted a chance. It is well written gripping mystery with a set of interesting main characters. As the first book in the series, the author introduced us to not only the main characters, she also includes the pov’s of minor characters, which add to layers to the story. I feel like I know these people in real lives.

The detectives are often sidetracked by their prejudices and rather narrow-minded in their investigation at the beginning of the story. I am glad that Fredericka follows her instinct and does something that helps the team later on. She is kind of like an outsider in the team—they does not believe she is competent as well as view her as too cold— and she knows it. However, Fredericka slowly proves her worth to the rest of team. With all her intelligence and calculating mind, she has her own problems and insecurities, and those traits are what make her endearing.

As for Alex, he is a good leader and I especially like it when he and Fredericka team up to interrogate the victims’ friends and family. The little moments between Alex and his wife are also cute and provide a little relief to the story otherwise gloomy atmosphere. He also gains my sympathy when he recognizes the difference between the lifestyle of the younger generation compare to that of his generation. Peder, on the other hand, is a good detective. But he shows himself to be an insecure, selfish, and immature man. Instead of being an understanding husband to his confined wife, he acts like an ass to her and every other woman close to him.

The atmosphere of the story is gloomy and horrible. It deals with domestic abuse and child’s kidnapping and subsequently, killing. It has such dark theme to it. The final confrontation with the killer is scary. I’m not sure I am satisfied with the way things turn out but maybe it is for the best.